Washington Times: Trump Fights To Free Schools From The Grip Of Marxist Teachers' Unions - For Kids And Country
close 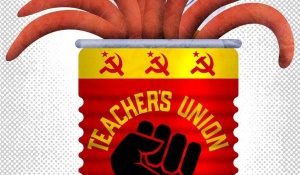 I had the honor of addressing the 2020 Republican National Convention on its opening night. I shared my experience as a veteran California public-school educator who has fought for years to give voice to America’s great teachers.

Great teachers are voiceless because so-called teachers’ unions have silenced us for decades while claiming to represent us.

When other dedicated teachers and I served within the unions, we spoke up in defense of children, parents, scientific fact and American values. For our trouble, we were brutalized, booed off the platform, barred from committees, shouted down and even spit upon by union leaders.

This is how unions treat devoted teachers. But what’s even worse is how their agenda of control deceives Americans and our children.

Unions have intentionally rewritten American history to perpetuate division, pervert the memories of our American Founders and disparage our Judeo-Christian virtues. Their lenient discipline policies morphed our schools into war zones, and unions fight to remove resource safety officers from our schools, support “defunding police,” sanctuary cities and abolishing ICE. Parents and teachers beware: The unions are behind the extremist sex education agenda in our schools, too.

And now they have the nerve to increase our suffering during the pandemic by using our schools and kids as leverage to gain their advantage. While claiming to protect our children and teachers, unions are denying our kids a quality education and blackmailing Americans into accepting their radical ideology.

How do they fund these dangerous initiatives? Unions collect billions annually from unsuspecting teachers, diverting earned money from its rightful place to fund their Marxist movement. Then they force this radical agenda into our classrooms — against our will — to the great detriment of America and our kids.

What could possibly be their motive for destroying our schools, attacking our teachers and corrupting our kids? The answer is simple. Unions seek to sabotage and dismantle our constitutional republic so they can grab more power and transform America into an authoritarian socialist regime.

Our American Founders told us the only way to preserve a free republic is with a well-educated, moral citizenry that can self-govern. So unions subvert our republic by undermining educational excellence, morality, law and order.

That’s why they spend hundreds of millions annually to defeat charter schools and school choice — trapping so many precious children from low-income families in dangerous, corrupt and low-performing schools.

To fight back on behalf of children and America, brave teachers brought a lawsuit against unions in 2016, and do you know who intervened against us? The Obama-Biden administration and California Attorney General Kamala Harris. They argued against us at the U.S. Supreme Court. Their comrades labeled us “spawns of satan” and slandered us in mainstream media. Of course, this is not surprising because the Biden-Harris ticket is funded and controlled by teachers’ unions. They’re advancing the same radical attacks on our free republic.

Many teachers do not support the unions or their toxic agenda, and yet we’re all trapped under union domination because laws promoted by unions have forced us to accept their “representation.” Most teachers never even got a vote.

No matter the unions’ abuse, we’ll keep fighting for the country and children we love — just like President Trump. He’s breaking the unions’ grip on our schools; that’s why unions have tried to destroy him since the day he was elected. But Mr. Trump isn’t afraid to fight for what’s right. He won’t back down. His courage gives great teachers renewed hope.

The Republican platform supports educational freedom. The Democrat Party does not.

So America’s great teachers, let’s stand with Mr. Trump in protection of the kids and country we love.”