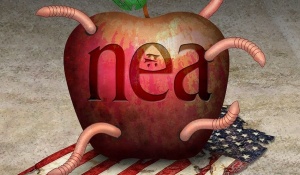 The National Education Association (NEA) is aggressively promoting an anti-American, polarizing agenda that is the root of the current racial divisions and rioting. They do this using clever messaging and The New York Times’ much-ballyhooed “1619 Project,” which intentionally perverts American history.

Times writers weave a twisted tale in which the evil of slavery so pervades the American experiment that literally nothing about our history isn’t motivated by some racist need to preserve the intentional subjugation, exploitation, marginalization and persecution of enslaved Africans.

Don’t get me wrong; America’s history is undeniably stained by the dark evil of slavery.

But to rewrite American history as if slavery is the defining and motivating factor behind nearly every aspect of our national story is ludicrous. It’s also dangerous and unethical to reframe history this way; especially considering America confronted the immorality of slavery head-on and defeated it.

The 1619 Project claims slave-owning colonists and hateful bigots hell-bent on institutionalizing racism set the tenor for our nation in 1619. It deceptively obliterates our true inspiration — Christian pilgrims who escaped religious persecution in 1620, launching the freest, most God-honoring “love your neighbor” nation in world history.

“1619” is chock-full of revisionist history promoting racial division and white blame, claiming our founding ideals were a lie purposefully told so whites could enslave blacks to get rich from an evil capitalist system. All this slander promoted by activists posing as journalists, educators and scholars is presented 155 years after hundreds of thousands of Americans (most of them white) gave their lives in the Civil War precisely to put an end to slavery.

It’s no wonder so many historians called out the NYT, but it’s revealing that the NEA did not.

Instead, the NEA coordinated directly with The New York Times, the Pulitzer Center, Southern Poverty Law Center and Black Lives Matter to put 1619 into the hands of educators and activists. Their goal? To assert a false but preferred narrative to advance a political agenda.

To legitimize their tales, the author of 1619 won the Pulitzer Prize, and the NEA praised 1619, saying it “informs and challenges us to reframe U.S. history and better understand the hold of institutional racism on our communities.” The NEA also launched “Black Lives Matter Week of Action” in America’s schools to train our K-12 children, college students and educators in their narrative.

Again, don’t get me wrong. Black lives do matter! Indeed, every human life is sacred. But the organization named Black Lives Matter is not what it claims to be. Like the unions, it’s a Trojan horse of anti-American, anti-family beliefs masquerading as defenders of good.

Now Americans are terrorized by rioters who believe these anti-American narratives, while the NEA quietly launches 1619 and its historical distortions into the history curricula of schools nationwide — virtually unchallenged.

America’s students are taught that the American Revolution was fought not to secure freedom from a tyrannical British Empire, but singularly to protect the institution of slavery.

This ignorance of reality and true history is a major weapon in their arsenal, and they’re pushing a raft of new pseudo-realities onto our culture, too.

No longer is gender defined by science or our Creator; it’s “fluid.”

No longer are environmental claims based on strict adherence to the scientific method; weak theories and hysterical “consensus” rule.

No longer are families seen as the center of a strong society, nor are children expected to obey or respect authority; “willful defiance” reigns while adults cower under the rule of child tyrants.

No longer is history determined by fact; instead, it’s reframed to support a constant assault on our Judeo-Christian culture.

That’s why union activists work behind the scenes ensuring this rubbish from The New York Times passes as approved history curriculum; against the will of good teachers. While The Times stirs up conflict, Black Lives Matter protests attract rioters inciting recurring fear and distraction, and the Pulitzer Center legitimizes 1619, the unions and their coalition stealthily indoctrinate our children and flip our nation’s history on its head.

America’s foundation was not built on institutionalizing slavery. The pilgrims sacrificed every earthly possession and their very lives to secure God-ordained liberties for every race, status and creed, guiding our Founders to their “self-evident” truth that “all men are created equal.” They inspired a free constitutional republic based on biblical principles that’s a beacon of hope in a very dark world.

But darkness always seeks to destroy light, so now our kids are forced to learn revisionist tales promoting atheism, racial division and ignorance of truth. And those peddling the lies stir up envy and hatred while bussing in rioters to subvert authority and devastate hard-working communities. Now they insist we defund the police. It’s the perfect recipe to erode our Judeo-Christian virtues, historical record and the rule of law which are vital to sustaining our liberties and free republic.

The NEA, The New York Times, their coalition and those they’ve indoctrinated have fallen for the devil’s oldest trick — pride. Fancying themselves “progressives” they’re stuck in the dark ages. Their false history actually subverts the progress we’ve made — creating hatred and divisions where there’s been healing, and ripping open old wounds and ignorance most Americans have overcome. They’re retraumatizing and legitimizing a victimhood mentality, forcing a chip onto the shoulders of black Americans and heaping mountains of undeserved guilt on those of white Americans. It’s dangerous; it’s destructive; and it’s dishonest. It’s also ripping our country apart.”

Rebecca Friedrichs is the founder of For Kids & Country, author of “Standing Up to Goliath: Battling State and National Teachers’ Unions for the Heart and Soul of our Kids and Country” and a 28-year public school teacher who was lead plaintiff in Friedrichs v CTA. The views presented here are strictly her own.

We already knew this, but It's GREAT to see more people with the same understanding. "The most dangerous person in the world is Randi Weingarten. It’s not a close call." - Mike Pompeo #UnionEXIT ... See MoreSee Less

'It’s Not a Close Call': Mike Pompeo on Who the Most Dangerous Person in the World Is