Washington Examiner: Police Officers And Teachers Must Rein In Unions Together - For Kids And Country
close 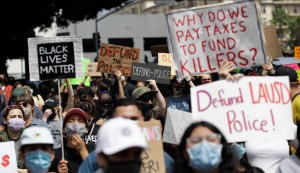 “Former Minneapolis police officer Derek Chauvin is behind bars, and his abusive tactics have thankfully led to pushback on unions for using collective bargaining to defend bad actors. Minneapolis Police Department Chief Medaria Arradondo expressed how “debilitating” it is when unions restore the jobs of officers that police chiefs have the “grounds to terminate” for bad behavior.

This is no surprise. I’ve never served in law enforcement, but I taught in California public schools for 28 years, and the unions I was forced to fund protect abusive teachers all the time. In fact, the National Education Association and its affiliates promote abuse. They surreptitiously use the dues and image of loving teachers to push a radical political agenda that has wounded our profession, harmed students, and is intentionally dismantling our American freedoms.

That’s why I sued them to end forced unionism.

I’ve never been on the inside of police unions, so I don’t know if their politics line up with those who masquerade as teachers, but I urge police officers to discover if their unions share NEA’s politics. The NEA helped put into office all of the Democrat politicians that are promoting anarchy in Minneapolis, Atlanta, New York City, Seattle, and more. The NEA controls the puppet strings of the politicians allowing dangerous antifa rioters to create an “autonomous zone” that’s occupying blocks of Seattle and forced officers out of their own police precinct. The NEA’s political allies are behind the huge miscarriage of justice against Atlanta Officer Garrett Rolfe.

The NEA’s top goals are abolishing ICE, supporting sanctuary cities, destroying President Trump and those who support him, denying educational freedom to poor children, undermining the traditional family and American values, and as reflected in adopted business item 19-2019, the NEA seeks, “hiring more counselors not cops.”

The NEA claims ousting peace officers helps end the “school to prison pipeline,” but it’s suspicious that the feckless, racially charged, lenient discipline policies promoted by the NEA (and the city of Minneapolis) have led to war zones in our classrooms. Now children and teachers who are serious about learning are cowering under the rule of child tyrants, and teachers seeking safety for their students are squashed by corrupt school and union officials.

The NEA presents American history in our schools as if slavery is the defining and motivating factor behind nearly every aspect of America today through the highly controversial and widely rejected 1619 Project. The NEA indoctrinates our children in its narrative during Black Lives Matter trainings at school. Now, we see children joining well-organized, angry nationwide protests against peace officers while Black Lives Matter, 1619 proponents, and rioters press a list of demands, including defunding the police, that’s right out of the NEA’s playbook.

Peace officers are the thin blue line standing in the way of this radical political faction working through unions to undermine our republic. That’s why they’re under attack.

The good news is we’re finally addressing the issue of police unions defending bad actors. But let’s be honest and also address the corruption of all government unions, especially the NEA, and the politicians who do their bidding to demolish our freedoms and safety.

If we’re truly anti-discrimination and pro-justice, we won’t just stop unions from protecting abusers, but we’ll also stop their radical alliance from destroying the livelihoods of good public servants, public safety, the sanctity of the family, and the liberties and blessings of our constitutional republic.

I urge peace officers to reject your union’s dangerous collective bargaining and research the politics inside of your union. My guess is that most officers have no idea how your dues are spent. Like teachers, you probably appreciate your local association, but your gut may be telling you there’s something amiss in the higher echelons of union leadership.

It’s certain your union is defending abusers. Tragically, that injustice is being used by radical political forces to legitimize mass rioting, excuse murders and serious injuries of innocent officers, allow destruction of property, and the absolute terror of Americans who are watching our freedoms dissolve before our eyes. They’re also using it as justification to devastate your profession.

If devoted officers discover your union is part of the radical union cabal destroying our country from the inside out, then I urge you to have the moral courage to expose it. You now have the right to stop funding them too. If you discover it’s redeemable, then clean house.

Our founders bequeathed to us the freest country in history. The least we can do as public servants is defend our nation from the abuses of government unions.”