Rebecca’s Musings: Be Of Good Cheer; Childlike Faith Is Good Medicine - For Kids And Country
close 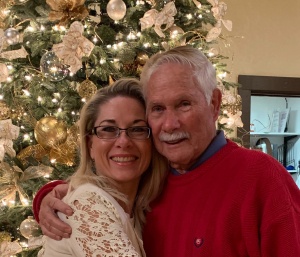 My Daddy and Me

Some folks are really scared during these uncertain times. That’s understandable.

When I was 12-years old, the summer before sixth grade, my daddy suffered a massive double subarachnoid brain aneurysm hemorrhage while far away on his two-week National Guard summer training. He was given three days to live, and I was told I’d never see him again.

On my knees in my grandma’s bedroom, I begged God to save him. And He did.

Doctors told us Dad was the first person in medical history to survive his exact trauma, and they admitted he’d been healed by a miracle, but they warned us that Dad’s life would be lived in a vegetable state. When he awoke from his coma, they cheered, but told us he’d never live a normal life.

Daddy was really skinny when he came home months later, and he was weak for a few months more, but you know what? He quickly resumed his activities. He not only returned to his high energy job, but he coached my siblings and me in all of our sports, cracked us up with his silly antics, worked on our broken down cars, and continued his ministry to the elderly too. Only God.

That experience at a young age bolstered my faith and taught me the power of passionate, fervent prayer when lifted up to a loving God. I’m not saying He heals every illness – Daddy’s own Mama died when he was only 3-months old. Life on this earth is full of suffering, but when God does heal, there’s no denying His tender and gracious touch.

That’s Daddy and me in the photograph. At 82-years old, Daddy still works out daily, he’s a bundle of energy, he’s still cracking us up, and still visits those old folks. Many of them are younger than him!

He’s always happy too; even though he’s suffered other injuries and painful losses and hurts in life. If you asked him why he’s full of joy, he’d tell you, “I put my trust and faith in Jesus.” I’ve heard him say that at least a million times. He recently told me that every time he walks up or down a flight of stairs, with every step, he says, “Praise the Lord.”

When I grow up, I want to be like Daddy. I don’t want to allow the fears of this world to consume me. I want to keep my eyes on the One who said, “In the world you will have tribulation; but be of good cheer, I have overcome the world.” John 16:33 b (NKJV).

Life on Planet Earth delivers a lot of uncertain circumstances, scary illnesses, broken hearts, and unfair trials, but there is a good and loving God Who desires to deliver us through them all.

Another great article by our friend Larry Sand. Do yourself a favor and set up Google Alerts for Larry Sand. ... See MoreSee Less

Mercifully, Banned Books Week, celebrated September 18-24 this year, is over, and we can take a deep breath for the next 51 or so weeks till it once again rears its ugly, hysterical, manipulative...
View on Facebook
· Share

We see all you parents new to homeschooling! Keep up the great work. It is not easy, but it is so worth it to your children. We are here for you! #homeschooling ... See MoreSee Less