Delighting In Safe Pasture With Linda: Jesus’ Fear And Grief - For Kids And Country
close 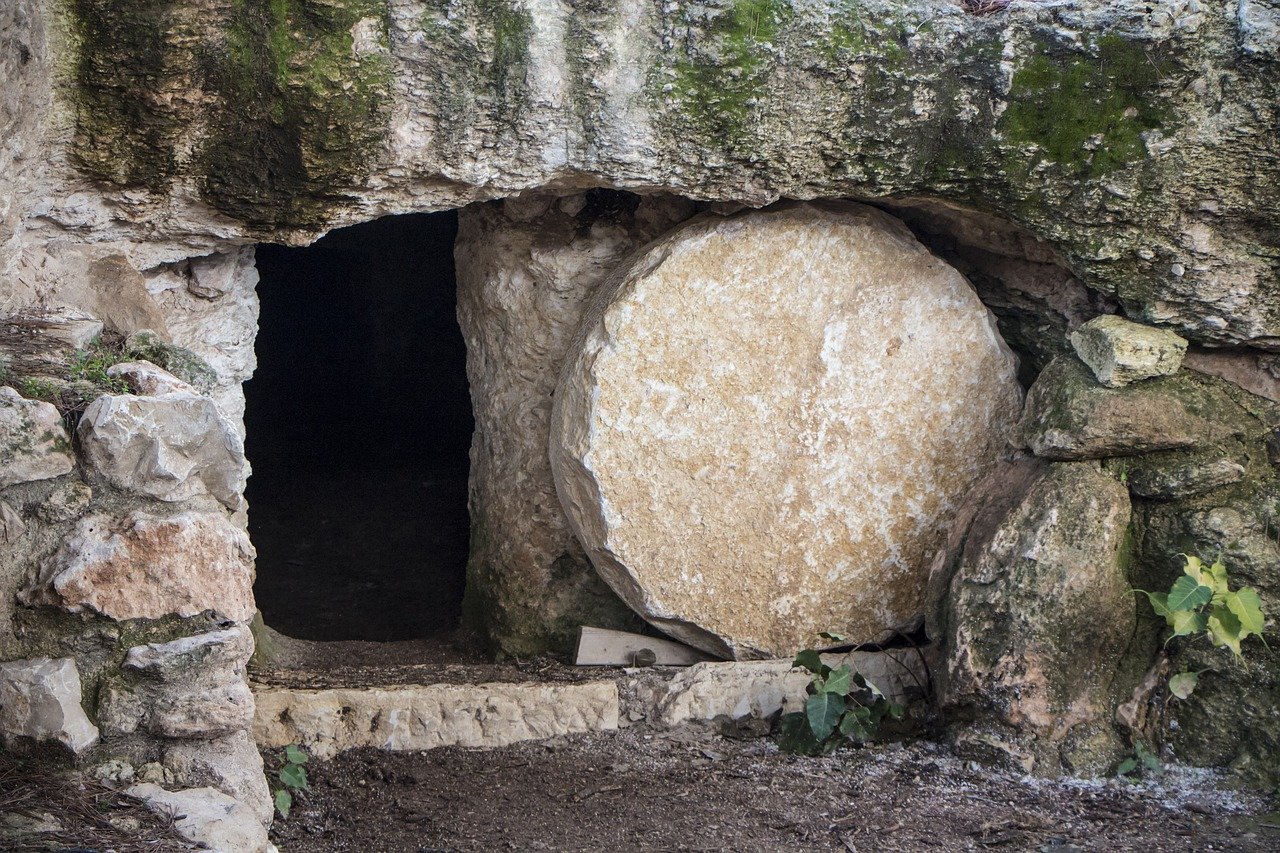 Holy Week (also known as Passion Week) represents the deep passion with which Jesus willingly went to the cross. It was His agonizing journey to His crucifixion. Palm Sunday begins our preparation for the agony of the cross and also for the joy of his resurrection.

Isn’t this a picture of the human experience, which comes at times with much sorrow and agony? But joy always comes in the morning…or better put…the joy of Easter Sunday is a-comin! Scripture gives us so much insight into the heart of Jesus, and about the week leading up to His death that I had a hard time deciding where I wanted to land! Let’s look at Mathew 26:36-46:

Then Jesus went with His disciples to a place called Gethsemane and He said to them, “Sit here while I go over there and pray.” He took Peter and the two sons of Zebedee along with Him and He began to be sorrowful and troubled. Then He said to them, “My soul is overwhelmed with sorrow to the point of death; stay here and keep watch with me.”
Going a little further, He fell with His face to the ground and prayed, “My Father, if it is possible may this cup be taken from me. Not as I will but as you will.”
Then He returned to His disciples and found them sleeping. “Could you men not keep watch with me for one hour?” He asked Peter. “Watch and pray so that you will not fall into temptation. The spirit is willing but the body is weak.”
He went away a second time and prayed, “My Father, if it is not possible for this cup to be taken away unless I drink it, may your will be done.”
When He came back, He again found them sleeping, because their eyes were heavy. So He left them and went away once more and prayed the third time, saying the same thing.
Then He returned to the disciples and said to them, “Are you still sleeping and resting? Look, the hour is near and the Son of Man is betrayed into the hands of sinners. Rise, let us go! Here comes my betrayer.”


In my opinion there is no better account of Jesus’s humanity on full display than in this passage. It gives us the full picture of the Son of God who put on skin and became like us. He is able to feel like we do, to understand sorrow and trouble as we do. It’s hard to imagine the Son of God afraid, but He was and He did that for you and He did that for me! Imagine how His heavenly Father felt and the sacrifice that took as well. We as parents can’t even begin to imagine! It’s more than we can comprehend. And all He asks from us in return is our love!

Christ’s entire crucifixion ordeal is an act of sacrificial love. The Father gave up His only Son to demonstrate His love for us. Did you know that Jesus was at the side of His Father when God spoke the world into existence? It really fascinated me when I first discovered that. It’s found in the book of Genesis 1:26: Then God said, “Let US make man in OUR own image.” This points to the fact that God was not working alone! Imagine for a minute a daddy who is a master craftsman, along with his son, designing and creating a world filled with beauty, including children to treasure and love…. But in their all-knowing power they knew it had to come with a price!

Jesus laid the groundwork for us. He went through more suffering than any other human being ever, and tucked away in these verses He shows us where and how He mustered up His strength and courage. And not because He was God at that moment, but a man! Did you notice that Jesus had to get away to pray to His Father three times? He pleaded with the Lord, He fell with His face to the ground, He asked again and again if there was any possible way He could be spared the trauma and abuse He was about to endure!

Have you found yourself praying for the same situation in your life over and over again? Do you find yourself asking the Father why? Or questioning how you will ever be able to endure the heartache? Do you tend to think it is a lack of faith? Well Jesus found himself feeling and asking the very same things, and surely Jesus did not lack faith!

After returning from His third time of pleading with His Father, notice the shift in His attitude and the obvious answer that He was given: Then He returned to the disciples and said to them, “Are you sleeping and resting? Look, the hour is near, and the Son of Man is betrayed into the hands of sinners. Rise up, let us go! Here comes my betrayer.” Can’t you hear it in these words that God had strengthened Him for the task at hand? We must not miss this! God will do the same for us. If we just keep trusting and seeking Him we will receive the strength we need when we need it most. And just like Jesus we will become overcomers and shine like the noonday sun!

In verse 39b, Jesus admitted His human weakness and fear of what was to come, yet He shows us His understanding of God‘s perfect will when He says, “Yet not as I will, but as You will.” God’s will is not always easy or pain-free. But His will always has joy just around the corner, because He promises to use everything for our good. It’s always a “new day dawning” kind of thing. His will always has perfect meaning and if Jesus Himself couldn’t emotionally grasp that in some of His most difficult moments, how can we expect that of ourselves? We can be very hard on ourselves when we feel weak!

Sorrow and pain move through our lives in many ways and seasons. Our reactions to them are human. Jesus showed us that, but He also showed us that we need to TRUST our heavenly Father no matter how hard it gets, even when nothing about our situation makes sense. So, we make the choice to not despair. We remind ourselves of the glory Jesus entered into once the battle was won, and the magnitude of its purpose!

Jesus might say to you or to me today in our present circumstances, “I fully understand your weakness. I know exactly how much this hurts, but never forget this, my child…be of good cheer for I have overcome the world in order that we may spend our eternity together, and I promise that you will not be disappointed!” When Jesus hung on the cross after the tremendous suffering He endured, He committed His spirit and said, “It is finished.”

Wow, what a statement! Suffering always comes to an end! His finished work on the cross meant you and I owe no debt for our sins. We are forgiven and redeemed and will forever live in His presence! There has never been such a true act of love. We have so much to be grateful for, don’t we? Let us go into this Easter celebration with a fresh new passion for all we’ve been given and a hope for so many new beginnings coming our way!

Philippians 2:5-8
Your attitude should be the same as that of Jesus Christ, who being in very nature God, did not consider equality with God something to be grasped, but made himself nothing, taking the very nature of a servant, being made in human likeness. And being found in appearance as a man, he humbled himself and became obedient to death, even death on a cross!

Hebrews 4:15
We do not have a high priest who is unable to empathize with our weaknesses, but we have one who has been tempted in every way, just as we are–yet he did not sin.

1 Peter 2:21
For to this we were called, because Christ also suffered for you, leaving you an example, that you should follow in his steps.

Mathew 27:54 records what took place the moment Jesus breathed His last breath:
When the centurion and those with him who were guarding Jesus saw the earthquake and all that had happened, they were terrified and exclaimed, “Surely He was the son of God!”

Can you imagine the realization of their grave mistake? Lives were changed the day Jesus cried out those last powerful words, “It is finished.” Many began to finally comprehend who Jesus really was; the truth had been revealed. They could no longer deny it, and so began the Jesus movement that we still live by today!

When someone comes to the realization that “Surely Jesus is the Son of God,” the truth begins to bring power to his or her life. It brings a fresh new start, a new beginning of forgiveness and purpose! I pray we can spread this Good News to someone during this holiest week of the year. And then they too can celebrate this Easter Sunday with great joy and gratitude!